Don't waste a recession: Why you should invest in digital marketing during a recession

COVID-19: The rethink on work space versus place, and reputation risk ex-C19

Over the past month, three themes have emerged from your feedback about your coronavirus response. We've summarised these as 1) Connection and the “network effect”, 2) Reputation...

Reputation risk management: The top 5 on our to-do list

Developing an integrated communication plan for your next conference

We're closely watching proceedings of the Royal Commission into misconduct in the Banking, Superannuation and Financial Services Industry. Our focus is on the reputations of the people and brands in the spotlight, and on trust in the whole industry.

In light of the Royal Commission we've recently completed a review of some 20 perceptual crises in the finance sector that our senior team have personally worked on over the last two decades. From this analysis we've identified nine communication strategies used by leadership teams to slow, halt or reverse a perceptual crisis.

We're sharing these in short videos. In this episode, we will discuss strategy #1, 'The Circuit Breaker'.

The concept of contesting damaging information is a core issues and crisis management principle, whether through PR or advertising. This is because inaccurate or damaging claims are often assumed true unless corrected.

Disputing these inaccuracies is strategy #2 in our nine-part series, 'Contestability'. To learn more check out our blog and short video.

Jacqui Maddock:           Hello, I'm Jacqui Maddock and this is Carden Calder, the founder and Managing Director of BlueChip Communication. We are in the strategic Public Relations crisis and issues management business, specifically for financial services. Carden has over 20 years’ experience building financial services brands and their leader's reputations.

Carden Calder:             And Jacqui, our Head of Media, has worked in Australia, the U.S., and China as a member of the media both in print, broadcast, and actually online as well. So Jacqui advises our clients around how to navigate consumer and business media in the way that's best to build brand and on occasion to protect it.

Jacqui Maddock:           Of course there is a lot of brand building and brand protection going on in Australian business community at the moment, as a result of the banking Royal Commission. And in fact, that's kind of why we're here today.

Carden Calder:             So we've seen in recent times, not only the banking and Financial Services Royal Commission, but in the midst of that, productivity commission findings about superannuation. We have previously been through quite a significant process of regulatory reform in this country and over many years, we've seen that whether it's government action, regulator action, or potentially consumer groups, there are plenty of reputation-threatening events for brands in financial services and banking. So we've spent some time  reviewing more than 20 years’ worth of data on reputation-threatening issues, so pretty large scale crises mostly, which have certain hallmarks. And we can see through looking at the data that there are strategies that work, and strategies that just don't work. Interestingly, the data I've looked at using case study methodology, shows that regardless of the scale of the issue, the reputational outcome can be actually very good. You can come out of a crisis with a better reputation, or you can emerge from it with a reputation so badly damaged that the sustainability of your company is actually threatened.

Jacqui Maddock:           So essentially we've boiled it down to nine communications strategies, nine lives if you like, and we’re going talk about the first one today.

Jacqui Maddock:           So today we’re going to talk about strategy number one, the ‘circuit breaker’.

Jacqui Maddock:           So what is the circuit breaker and when have you seen it deployed well?

Carden Calder:             Okay, so the hallmarks of a circuit breaker, as an issues management strategy, are that it's usually company driven. By definition it actually is something that you control yourself and you create. It is also typically going to signal a major shift in the issue, for example a reversal in the path of the issue or the narrative, so the dialog changes completely about the issue. The other thing is that it almost invariably demonstrates strong leadership action.

Jacqui Maddock:           Okay, so for example I don't want you to name names, as much as it might be an interesting thing to do. When have you seen it work well? In what kind of circumstances does it work well?

Carden Calder:             Right, so sometimes it can be used at the very beginning of an issue, which looks like it's going to escalate quite rapidly and aggressively, to arrest the incline. It actually arrests the rise of the issue, so you can deploy circuit breaker at the very inception of what can be a major reputational threatening event. Or you could use it at the end of an issue to put a floor under it. So at any point between those two points in a major issue trajectory you can stop it by injecting this kind of action. But for it to work, you know, the hallmarks of it being successful are that it has to establish a floor on the issue, which will actually stop the decline if you like. It has to signal the end of a phase or a chapter, so it must be a clear change in direction of some sort. And, it has to be seen as the right thing. You know, interestingly it has to be something where justice is seemed to be served or leadership have taken swift decisive action. It's something that actually builds confidence in stakeholders of all sorts. It might be staff, it might be media, it might be government actually turned around and said, “Thank you.” Not necessarily “Thank you, job well done,” but it's more about accepting that this is now the right thing that's been done and we can stop pressure to have a change created here.

Jacqui Maddock:           So for example a circuit breaker might be if a telecommunications company had stopped streaming the World Cup say, or if there had been a network outage or that sort of thing.

Carden Calder:             Or if a bank issues an apology. Or if a wealth management firm exists a range of people who might have been associated with a particular issue or a historic commercial decision that wasn't seen to be right by today's standards. These are actions which are often quite dramatic. They're things that might show a level of corporate vulnerability and humility, certainly the apologies that we've seen which have been very effectively executed in times past. Not necessarily the most recent history, but there have been times when banks most recently have turned around and apologised for issues. One of the ones that I think is less controversial would be NAB with the recent ATM outages where they were on the front foot, they were visible in media, they apologised and most importantly they offered to provide some sort of commercial remediation to the effected vendors, shop owners who had NAB EFTPOS terminals that failed.

Jacqui Maddock:           Yeah. If we were to outline some of the main tactics. What would you decide that they would be. So getting out on the front foot sounds like a common thread for all those issues.

Carden Calder:             Yep, full and frank disclosure about what the actual issue is or disclosure that you don't yet know what it is and what's caused it or how to fix it but you're working one it. It has to be a perception of immediate action and taking ownership. It might well be that the problem is not something that you're responsible for but if you take ownership for the solution, understanding the grief it's causing the people who depend on you, then there is huge good will to be allowed to continue to lead the issue and to have sort of permission, if you like, to create a solution.

Jacqui Maddock:           You mentioned before that there is a window of opportunity with these things and it will differ with each circumstance, but for example to use the NAB example, I'm guessing that immediacy, getting straight in there is really important.

Carden Calder:             So the NAB ATM machine broke on the weekend and NAB were out there on the weekend with a spokesperson who was confident, authoritative, but also looked like she hadn't been to hair and makeup before she was on camera and so, as the media were watching that, it was very evident that there had been immediate focus applied by the bank to solving the problem, not to managing their image. Because they had detailed information, because they talked about the steps they were taking to uncover and remediate the issue and because they talked almost immediately about some sort of payment or some sort of reparation to the people who were affected, it really had ring of absolute authenticity about it. So media reported the story in a very neutral way. There wasn't a lot of criticism. It was news event, but it wasn't a reputation event in many ways because it was handled very well.

Carden Calder:             Right. You've seen that, right? The way a story starts can be very different to the way it ends if there's corporate action.

Carden Calder:             To me, a key feature of the circuit breaker if nothing else, is decisive leadership action, which wins support. So we see these hallmarks of circuit breakers as things like commercial remediation, exiting leadership who seem to be the problem or who must be seen to take responsibility for it by paying, if necessary with their jobs. In other contexts you see it as suspension until there is a finding. We see it as corporate apologies, you see it as a major shift in operations. And when those hallmarks are there, they have the sorts of things that set you up for a good circuit breaker. You might say it's just good leadership but if it's not both good leadership and good communication practice, i.e. making sure that you see this is the kind of strategy it is, and you execute it with appropriate discipline around delivery of the strategy and its mental discipline from the part of the team running this as leadership and communication people to see it through – then it doesn't work.

Jacqui Maddock:           Absolutely. Okay, well I think that that brings us to the end of the circuit breaker, but we have so many more insights that we want to share with you we want to break down all of the communications strategies at this very timely moment in history of the Australian financial services industry. 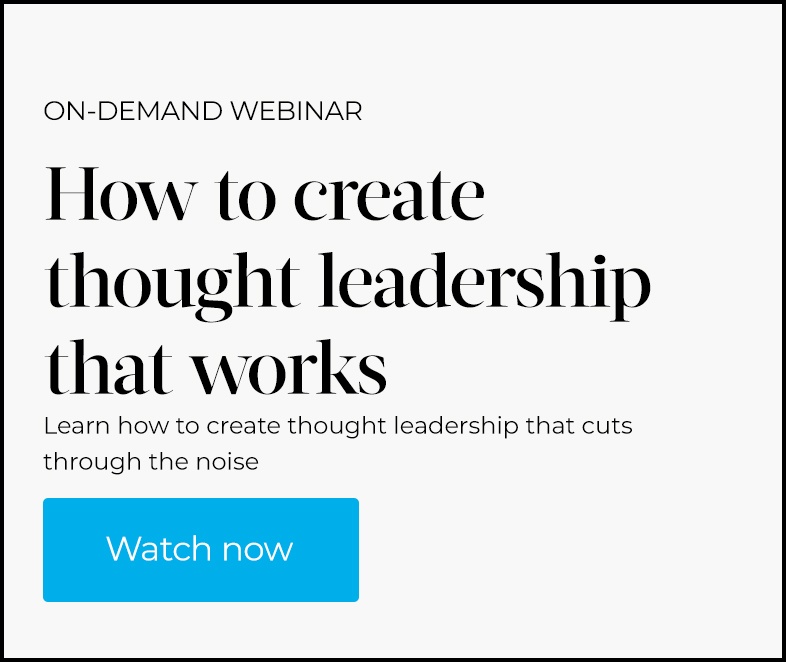